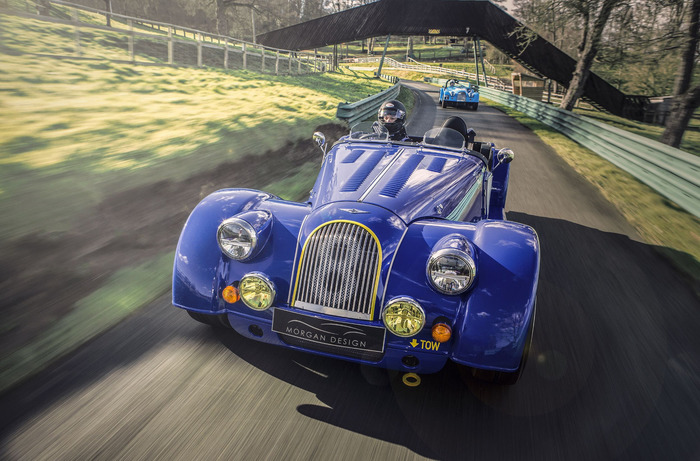 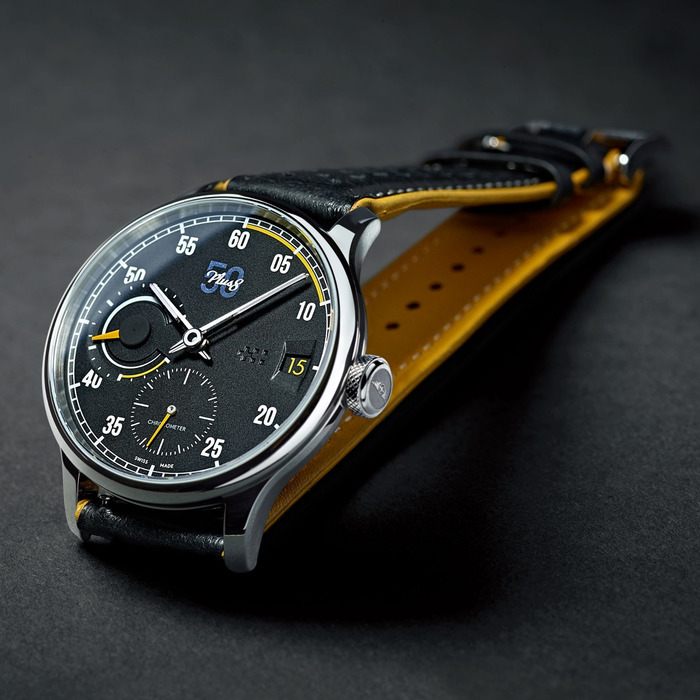 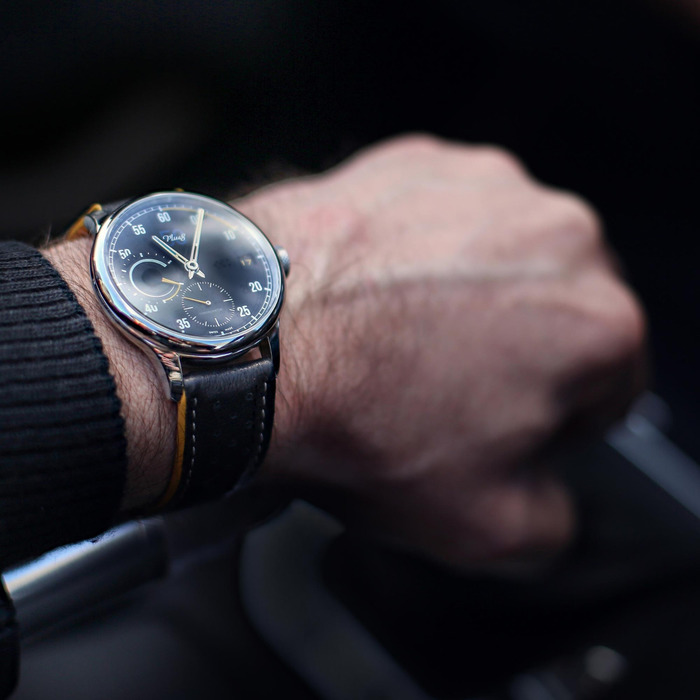 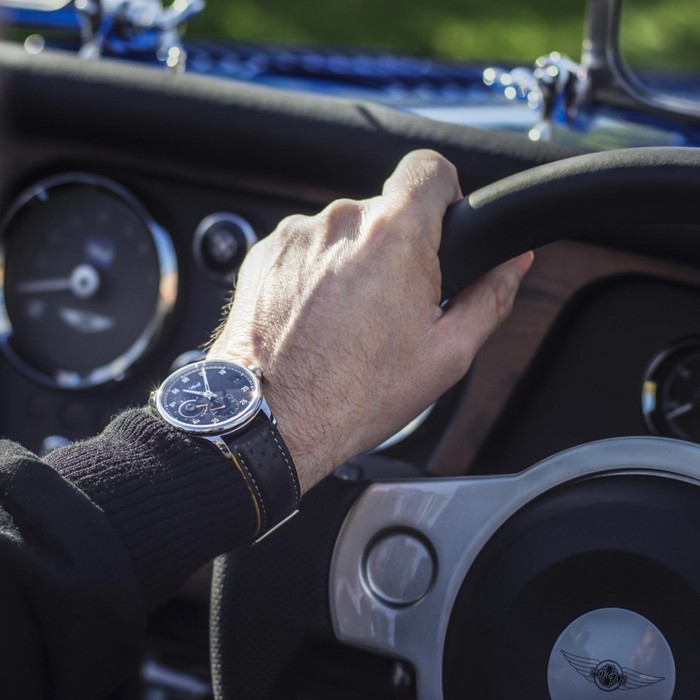 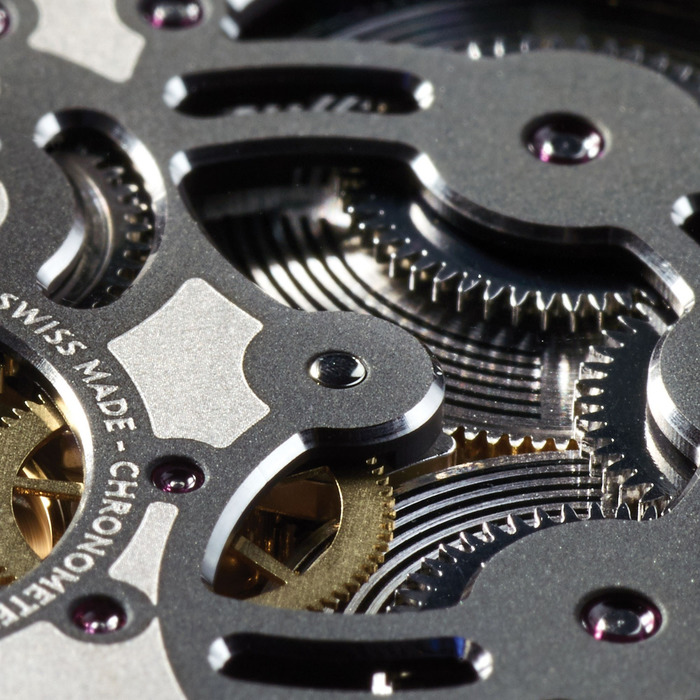 We’re delighted to offer for sale the second of our very special Morgan Plus 8 50th Anniversary models for sale. This particular example is not yet in build and as such can be specified to either the Blue or Green specifications. The Plus 8 can also be chosen in right hand drive or left hand drive. Please read the information below to discover what a unique opportunity we have to offer you.

The Morgan Plus 8 50th Anniversary Edition celebrates 50 years of a motoring icon and pays homage to Morgan’s most popular 4 wheeled model over the last half-century.

Production will be limited to just 50 examples, each one hand-built and carrying a unique model number.

The Morgan Plus 8 50th Anniversary is a fitting combination of craftsmanship, luxury and technology. A lightweight aluminium chassis and 4.8-litre BMW engine sit beneath the traditional Morgan body. At just 1,100kg, the Plus 8 is one of the lightest V8 passenger cars in the world and is capable of 0-62 mph in 4.5 seconds and a top speed of 155 mph. The Plus 8 50th Anniversary Edition will be the last Morgan vehicle to feature the naturally aspirated BMW V8 engine.

The Plus 8 50th Anniversary Edition is available in two striking colours and two specifications – blue ‘speedster style’ with an open cockpit, or green ‘traditional convertible’ with a soft-top.

The Plus 8 50th Anniversary Edition is available in two striking colour schemes and two specifications – blue ‘speedster style’ with an open cockpit, or green ‘traditional convertible’ with a soft-top.

Throughout Morgan history, significant prototypes and some of the most successful V8 race cars have all been painted blue. The most famous racing version, MMC11, was known for its distinctive blue paint, and this is reflected in the ‘speedster-style’ open cockpit version. The Plus 8’s colours were selected in celebration of this tradition.

A true British sports car, the Plus 8 50th Anniversary Edition will also be produced in British Racing Green – the most popular colour associated with over 109 years of the Morgan Motor Company. The green models will be specified with a soft-top.

Each car will be individually liveried by Morgan’s craftspeople with graphic work applied beneath the lacquer for durability, and as a clear signifier of the special nature of the vehicle. Each Plus 8 50th Anniversary Edition is also finished with a unique number on the exterior back panel of the car.

Morgan’s in-house design team specially commissioned new five-stud wheels for the Plus 8 50th Anniversary Edition. These were design to reflect the forms of the original cast wheel commonly equipped to Plus 8’s throughout the years. The 50th Anniversary edition wheels are refined to handle the increased power of the BMW V8 engine beneath the hand-crafted body.

The surface of the wheels has evolved to maintain strength and allow room for the large brake calipers whilst not only maintaining strength, but also the ‘deep dish’ so rarely seen in modern vehicle design. The wheels are finished in a specially created soft celebratory champagne colour.

Drawing inspiration from the first production Plus 8, MMC 11, a spun aluminium domed panel adorns the rear of the Plus 8 50th Anniversary edition. A plaque inside each car denotes its unique number of production, from a limited production run of 50 examples.

Authenticity is maintained to the finest detail, with light leather wrapping used to seal the external wing panels, carrying the same colouring as used on the original prototype MMC 11. It also plays a role in accentuating the iconic wing profile of the classic Morgan.

From the front, modern LED lighting adopts a simplistic graphic blending modern and traditional. Spot lamps, painted in body colour, add to the purposeful look of the model and give it an instantly recognisable presence on the road. The addition of extra bonnet louvres and a leather bonnet belt hint at the aggressive nature of the V8 engine, whilst the number ‘8’ painted onto the front grille is a direct inspiration of the racing days of the original Plus 8.

For the interior, a naturally waterproof black leather has been chosen to provide durability essential for vehicles without a roof. A highly detailed, twin-pleated stitch has been adopted for the seat centres, in accordance to the motorsport theme that carries throughout the interior and exterior. Specially designed dial faces complete the heritage feel of the matte-finished walnut dashboard.

First conceived by company owner at the time, Peter Morgan, the head-turning Plus 8 prototype was revealed to the public at the Earls Court Motor Show of 1968 and was powered by a Rover V8 engine with a Moss gearbox.

The British coachbuilder’s first Plus 8 production model, MMC 11, was one of the most successful cars that the company has ever built, and production continued for 36 years. Approximately 6,000 Plus 8s were built at Morgan’s Pickersleigh Road factory until the model was discontinued in 2004 when the production of Rover V8 engines ceased.

In 2012, the Plus 8 was reborn into the Morgan range, on a lightweight aluminium chassis with the powerful BMW V8 engine, as used in the Aero range at the time. With a restyled body, the new Plus 8 was proportionally larger and significantly quicker than any ‘classic’ Morgan before it.

Continuing the success of Morgan’s partnership with fellow British company, Christopher Ward, the two companies are delighted to collaborate on another timepiece for the Morgan range. A C1 Morgan Plus 8 Chronometer Anniversary watch will accompany each Plus 8 50th Anniversary Edition produced, allowing owners to extend their Morgan experience beyond the pure driving pleasure that the Plus 8 provides. Each Christopher Ward and Morgan Plus 8 50th Anniversary Edition watch contains a small piece of the original ‘MMC 11’, the car that the anniversary model pays homage to, embedded into the back plate. Ownership of such a watch allows each customer to become a true custodian of the Morgan Plus 8, with ownership spanning half a century.

Morgan’s design team worked closely with Christopher Ward’s product team to create the watch design, which is powered by Christopher Ward’s renowned mechanical chronometer Calibre SH21, with a unique new dial, strap and subtle detailing. They also collaborated to design the dashboard dial faces for the Plus 8 itself, allowing both the watch and the car to take inspiration from each other. Each watch will be numbered 1-50 and every owner will receive their corresponding numbered watch for their Plus 8.

If you require any further information or would like to arrange a viewing please don’t hesitate to contact our sales team.