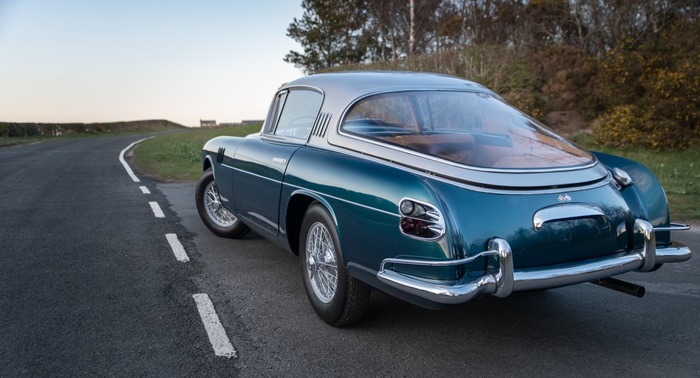 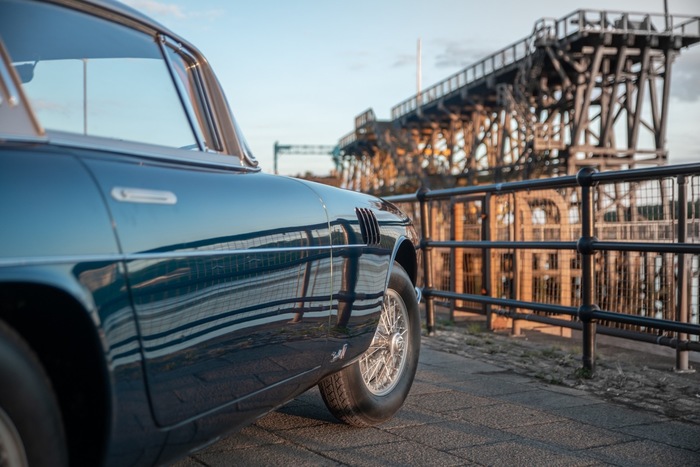 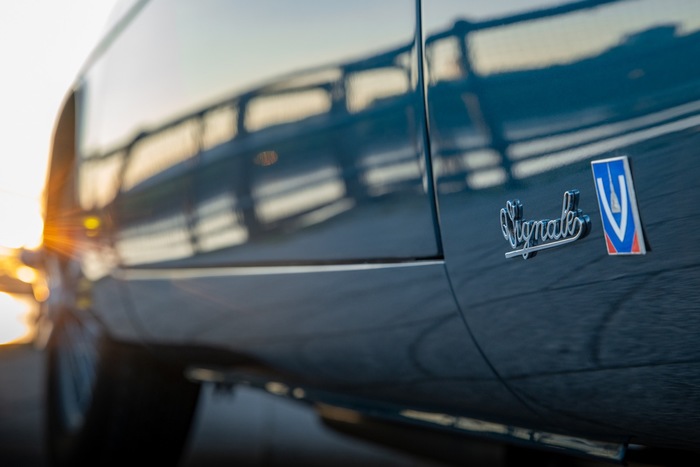 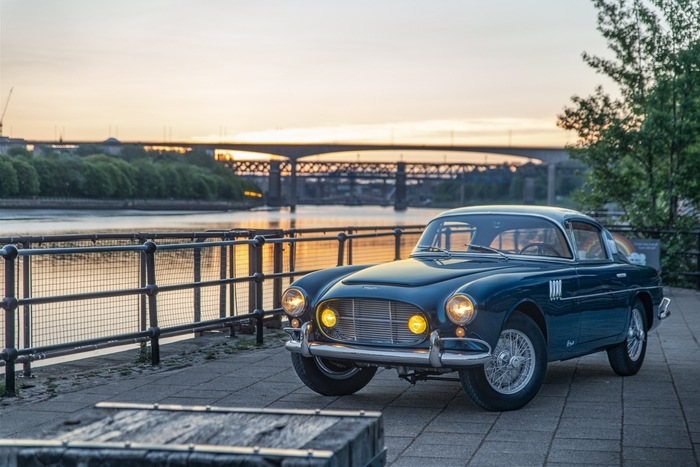 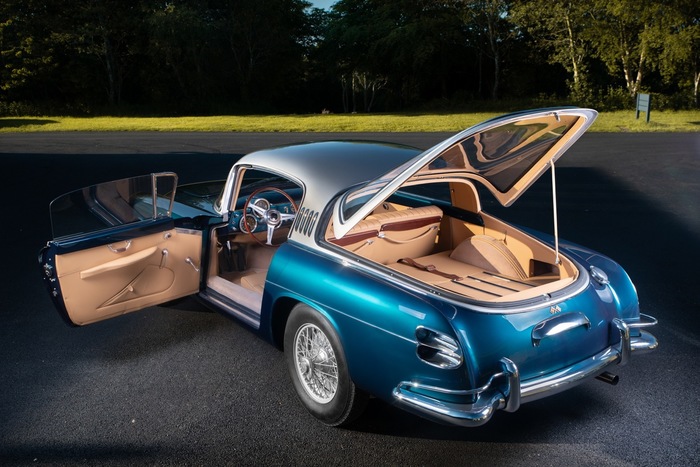 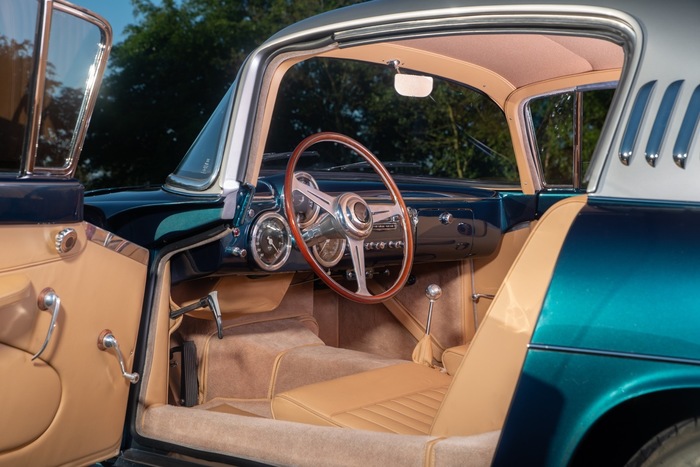 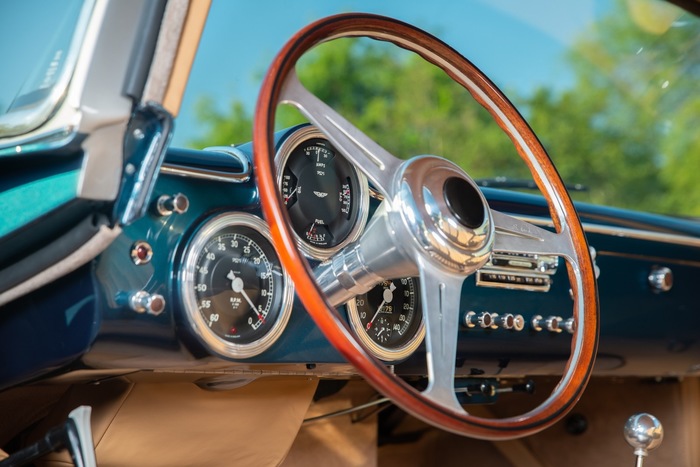 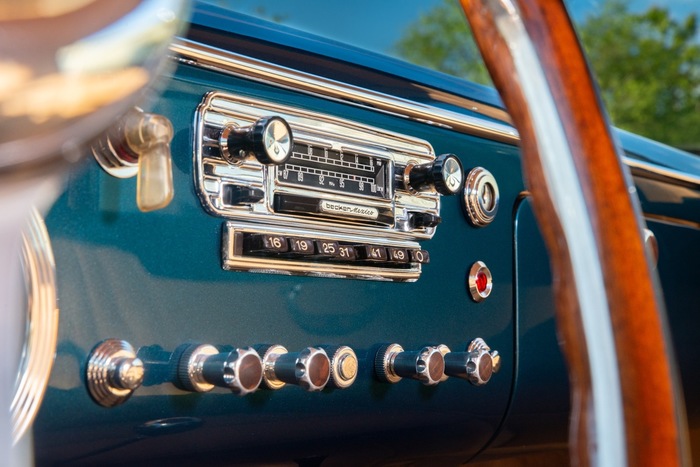 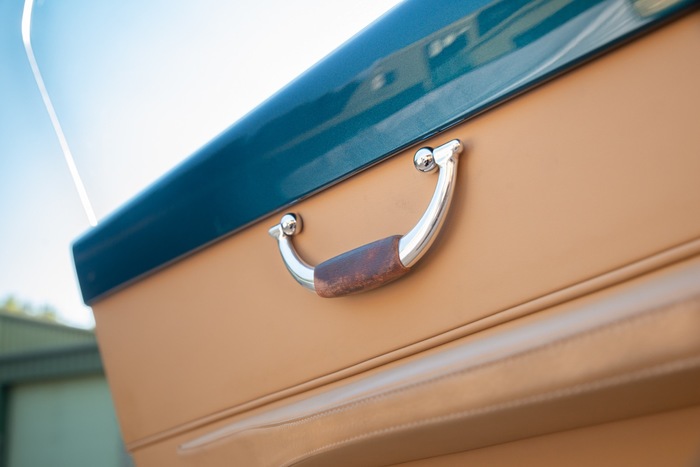 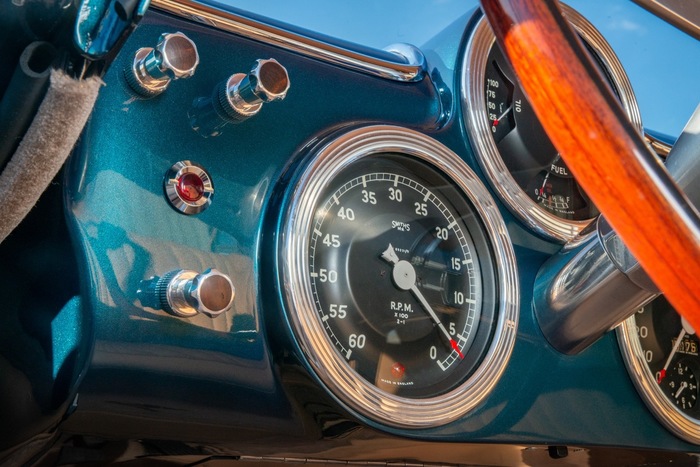 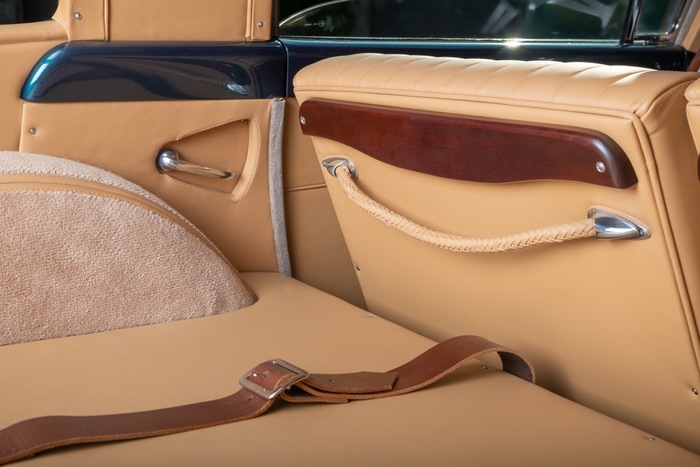 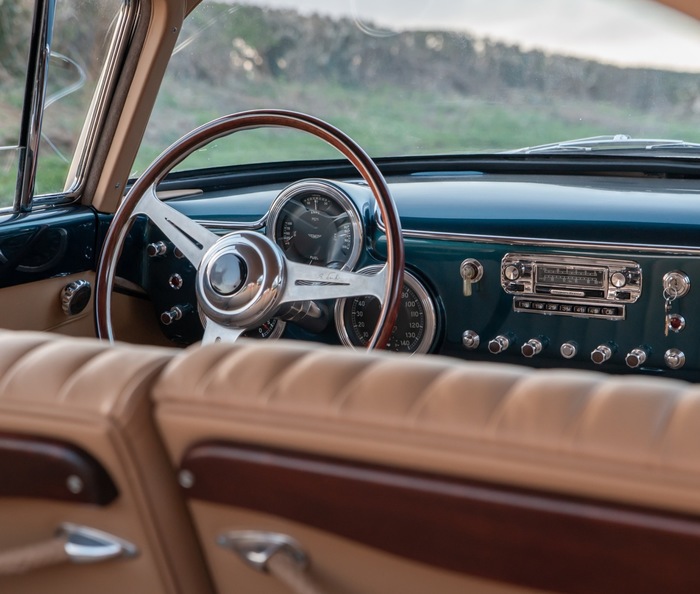 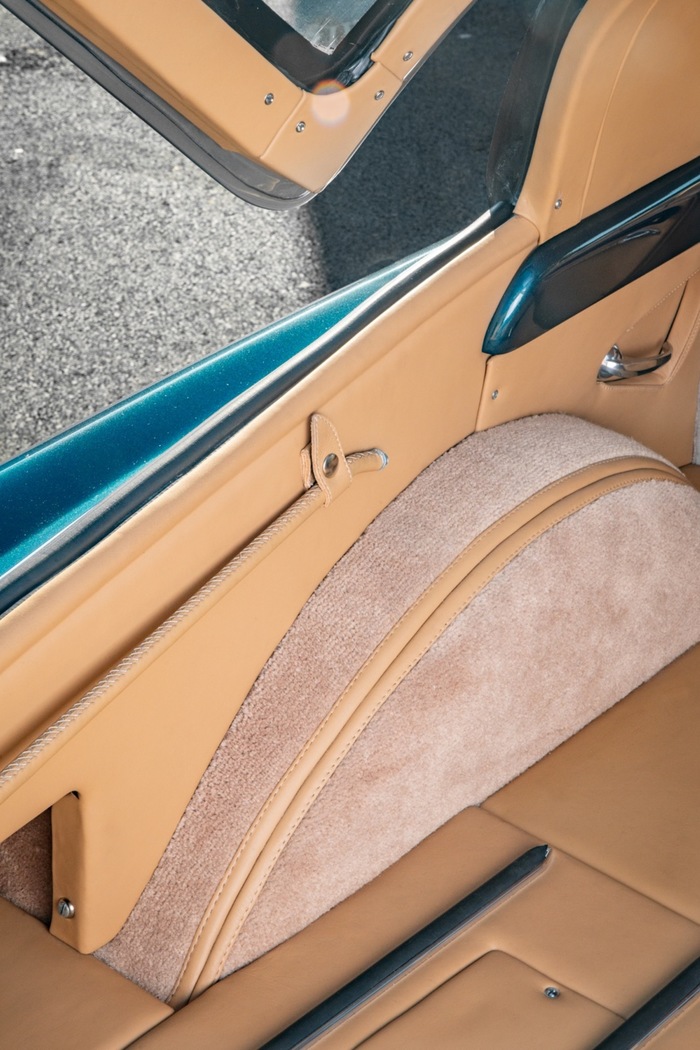 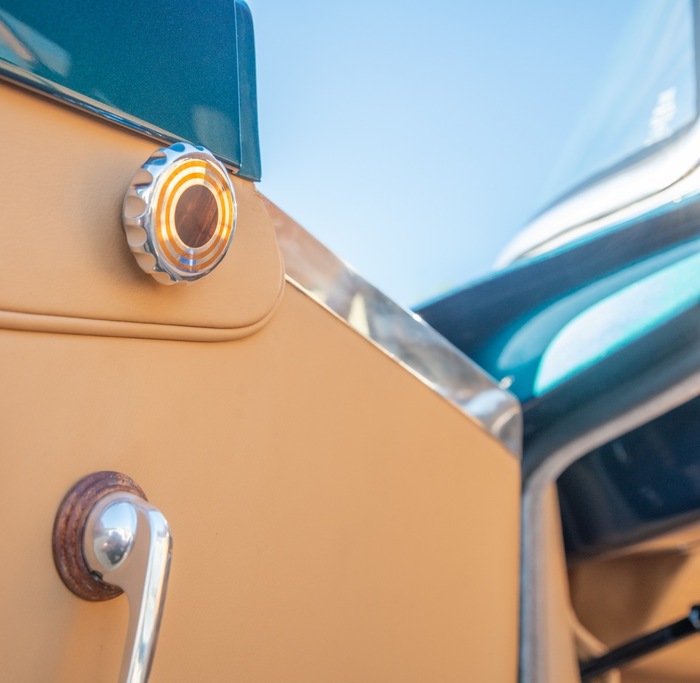 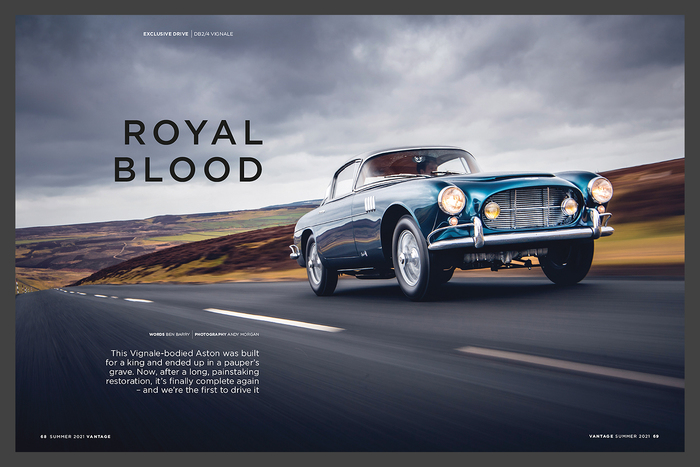 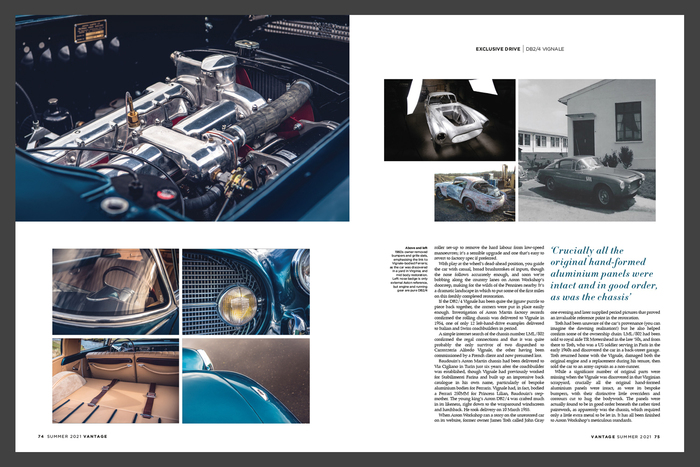 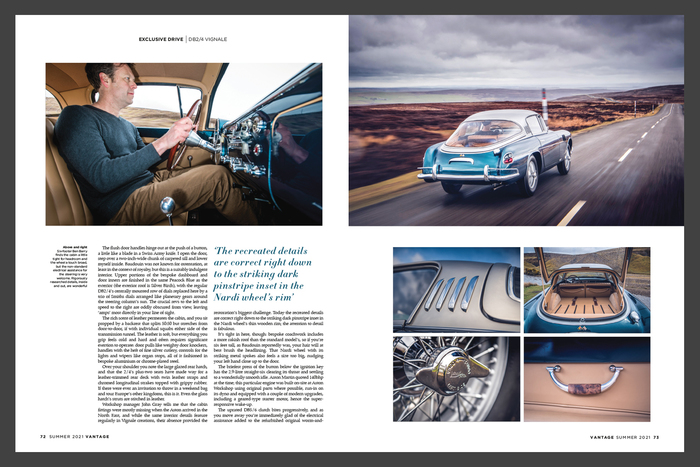 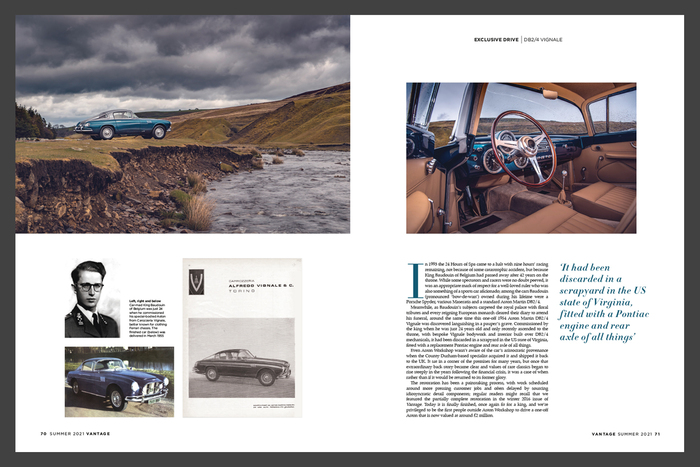 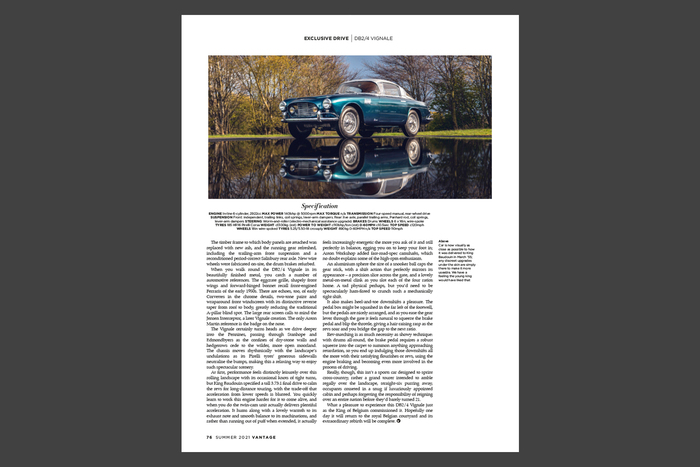 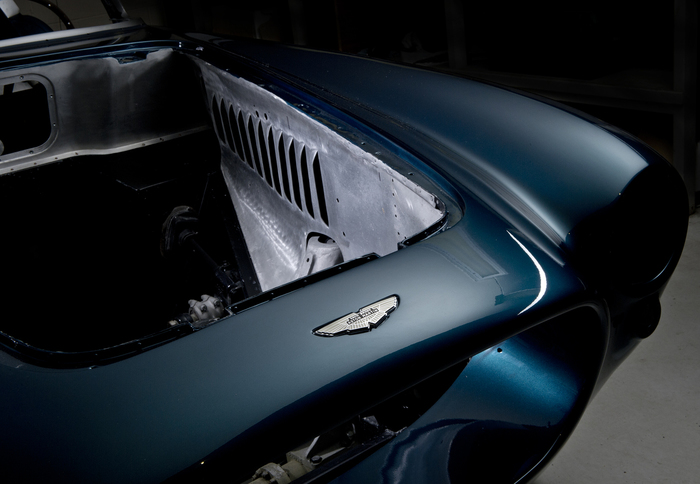 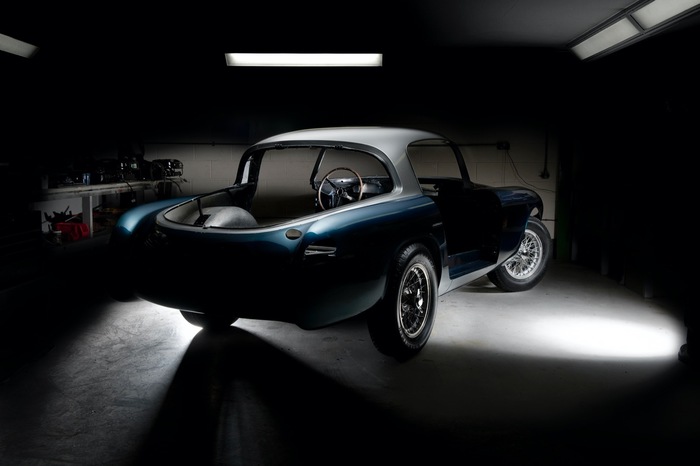 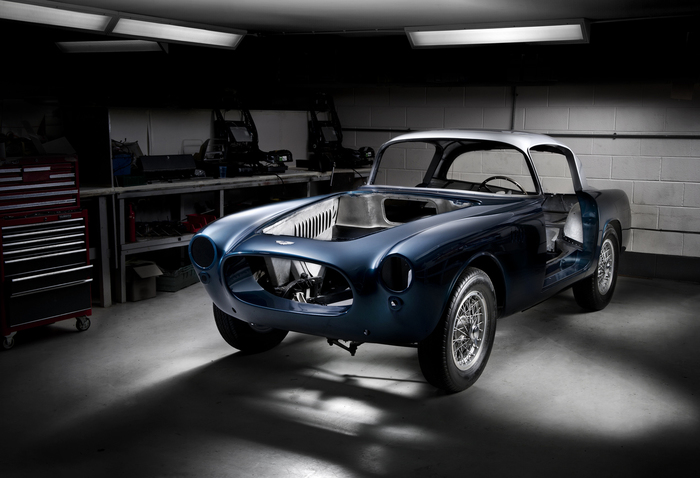 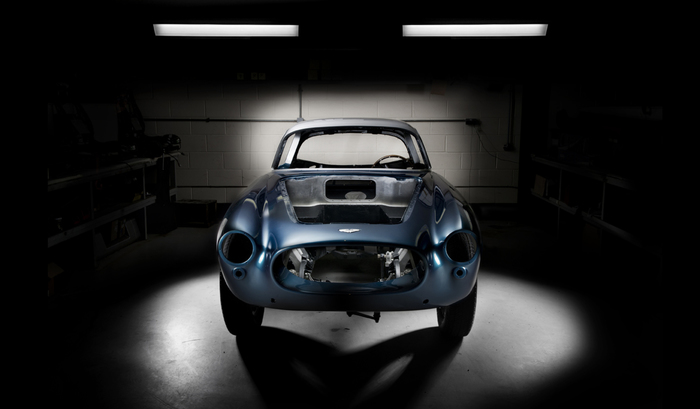 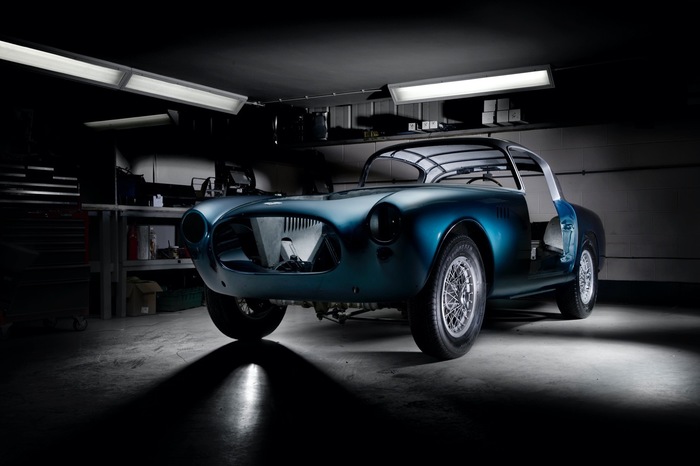 Aston Workshop is delighted to offer this incredibly rare 1954 Aston Martin DB2/4 Vignale for sale, a historically significant vehicle distinguished by its bespoke body styling and unique interior specification. Originally commissioned by King Baudouin of Belgium and crafted by Italian coachbuilder Vignale, this one-off DB2/4 Vignale is now fully restored to Aston Workshop’s exceptionally high standards and ready to be enjoyed by its next owner.

The DB2 was the first Aston Martin to wear new owner David Brown’s initials, and in later DB2/4 specification offered with +2 seating and enhanced performance. Only around 1200 DB2s of all variants were produced, making every example highly collectible today, but none more so than the 12 left-hand drive DB2/4 rolling chassis delivered in period to coachbuilders in Italy and Switzerland. Vignale of Turin received two of these 12 rolling chassis, with this historically significant vehicle presumed the sole surviving example.

Chassis number LML/802 was delivered to Carrozzeria Alfredo Vignale on Via Cigliano in Turin on 28 September 1954, complete with the later 2.9-litre LB6 straight-six engine producing 140bhp, and a 3.73:1 ratio rear axle intended for relaxed long-distance touring.

The unique DB4/2 was delivered to its aristocratic first owner King Baudouin on 10 March 1955, four years after his majesty ascended to the throne following his father King Leopold’s abdication. He was just 24 years old.

King Baudouin sold LML/802 to palace aide TR Mottershead in the late 1950s, where it was kept in Moselle, France, before being purchased in the early 1960s by James Toth, an American soldier serving with NATO in Paris. The DB2/4 Vignale returned to the US with Toth, who damaged both the original engine and a replacement before selling LML/802 to an army captain in non-running condition.

Eventually this one-off Vignale-bodied Aston was bought by Roland Wommack of Virginia, and offered to Aston Workshop as a restoration project. Although in a state of neglect, the DB2/4 Vignale retained its original Vignale aluminium panels, chassis, suspension, bumpers, grille, light clusters and much of its superb original detailing. The second engine and gearbox were also present.

Stripped to its constituent parts before being fastidiously restored, the finished vehicle remains faithful to the original, while adding a handful of carefully chosen and hidden mechanical enhancements as detailed below….

After being secured on Aston Workshop’s jig to confirm alignment and to ensure rigid support during any structural repairs, the original tubular chassis was bead-blasted and inspected. Found to be in good order, only a small amount of new metal was required to ensure the structural integrity of the chassis tubes.

Fillet sections, floor panels, rear wheel arches, B-posts and sections of the front bulkhead have been expertly repaired or replaced as required, while new hand-formed ash replaces the original timber sections. The complete chassis has been primed, undercoated and power-coated in satin-finish black to ensure robust corrosion protection for years to come.

The DB2/4 was supplied to Aston Workshop with a non-standard rear axle, but the restoration process ensured the chassis was restored to allow the fitment of a refurbished period-correct Salisbury rear axle. The suspension has been fully overhauled, the existing drum brakes refurbished and new partially chromed alloy wheels have been crafted in-house to the original specification. To increase ease of use, the original steering box and column benefits from the addition of electrically assisted power steering.

The original Vignale hand-worked aluminium bodywork was found to be in remarkably good order beneath its tired paintwork, and was taken to bare metal and fully reworked to ensure it was perfectly smooth and free of imperfections. After meticulous refitting and alignment with the restored chassis, the one-off Vignale bodywork was repainted in the original Peacock Blue with Silver Birch roof, using two coats of paint followed by two coats of clear lacquer. The process consumed hundreds of hours in preparation and painting alone and results in a deep, lustrous finish.

While largely missing when Aston Workshop first received the vehicle, the exact 2+2-seat interior specification has been faithfully recreated using period photographs and historical information. The finished car presents with a beautifully crafted cabin finished in fawn leather with all instruments and trim exactly as specified in 1954. Ribbed leather seats are finished in sumptuous fawn leather and complemented by an instrument panel and upper sections of the door panels finished in the Peacock Blue exterior colour. The steering wheel features three large metal spokes and a thin wooden rim that frames a trio of metal-ringed Smiths dials. Chromed inserts and switchgear add to a suitably restrained if sophisticated atmosphere. The scene is well and truly set for relaxed long-distance touring!

The car was supplied to Aston Workshop with its replacement engine, but both the engine block and cylinder head were found to have serious defects and new replacements therefore sourced. The new engine block also benefits from new pistons, con-rods, liners with copper sealing rings, crankshaft and bearing housings, while the oil galleries have been increased in diameter. The cylinder head is fitted with new valves, guides, collets, springs and core plugs, as well as camshafts to fast-road specification. The carburettors supplied with the vehicle have been restored. Careful modifications to ensure longevity and reliability include an uprated oil pump, electronic ignition and a geared-type starter motor.

Both the head and block have been pressure tested to 40psi, and the finished unit carefully run-in on our dyno, where it recorded strong power, the car produces 175BHP and 200ft pounds of torque and an even spread of torque throughout the rev range. Crucially, Aston Workshop rebuilds eliminate the oil leaks common to these engines in period, and none were detected throughout this rigorous testing stage.

The transmission was fully steam-cleaned, reconditioned and overhauled, and the clutch uprated to DB5 specification, with the original flywheel refreshed with a new ring gear.

With its aristocratic significance and unique place in both Aston Martin and Vignale’s history, this one-off, meticulously restored DB2/4 Vignale represents a unique opportunity for the Aston Martin collector. Our helpful sales team are happy to discuss the car in further detail on +44 (0) 1207 268 932 or please email sales@aston.co.uk.